Most of you know what a katana is. In fact, I don't think you need even a peripheral interest in Japanese arms to know that a katana is a type of sword. However, Littlesin, one of the stars of the IGN design squad, recently had an interesting conversation with a female dancer in front of a Japanese restaurant called, by chance, Katanaya. The dancer told Sin that her name was Katana. He asked, naturally enough, "Oh, after the sword?" She responded, naturally enough I guess, "Oh no, after the motorcycle." Nuts, huh?


At any rate, I told you about this thing yesterday in my story about the Hori PS2 memory cards. The company stopped by the IGN office last week to show off what will be its first official US product: Katana: The Soul Controller. I admire Hori's desire to enter the market dramatically. No matter what you think about the Katana, it is a memorable device. Most companies start off with something predictable and "safe." Maybe it's a cost-effective steering wheel. Maybe it's a stock-looking wireless pad. It's never a three-foot sword and sheath.

Those of you who stick to the domestic market might not know who Hori is. The Japanese company has been in the videogame hardware market for about 20 years and has quite a line of products. If you're Japanese is sharp then you can check out all the good on the official site. Unfortunately an English site or section isn't available yet.

Hori plans on releasing the Katana at the same time Capcom releases Onimusha 3 Demon Siege, which should be May 4, 2004. In Japan the Katana will be released with an official Sony license. In the states Hori got Sony's blessing, but no go on the license. It will, however, have a Capcom license.

Obviously, Hori is aiming at the hardcore gamer/collector with the Katana. Any peripheral with a price tag this high -- the Katana should retail for $150-$160 -- is a hard sell, and Hori knows that it will not be a mainstream device. This in mind, the US release will be between 3,000 and 5,000 units. 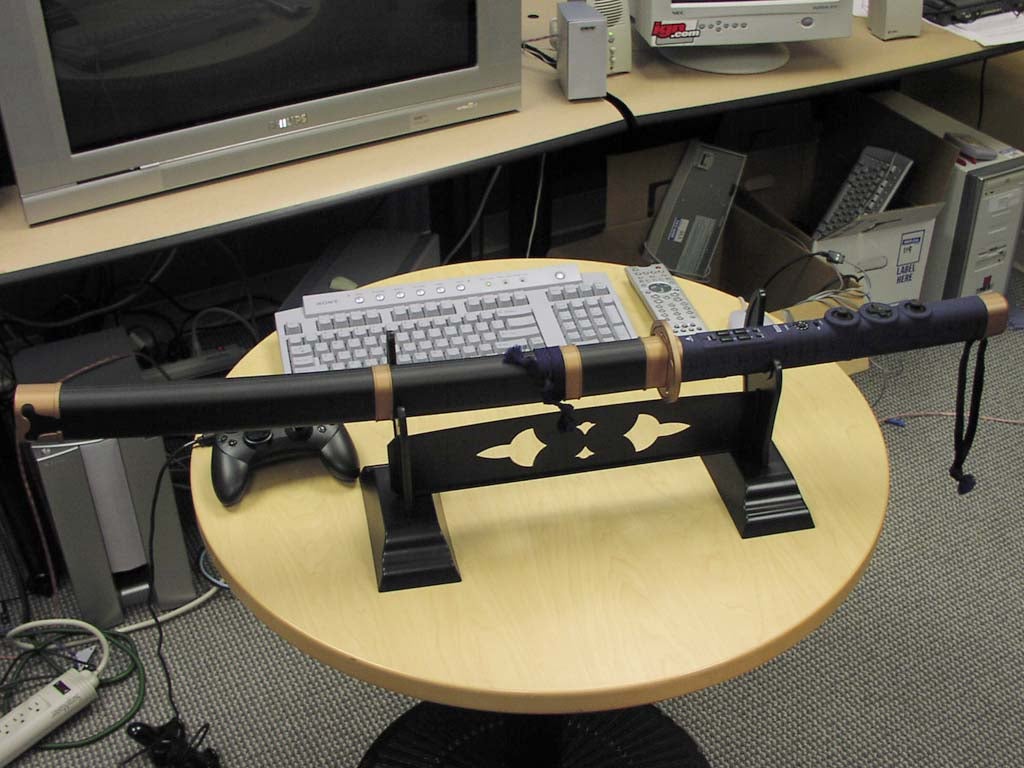 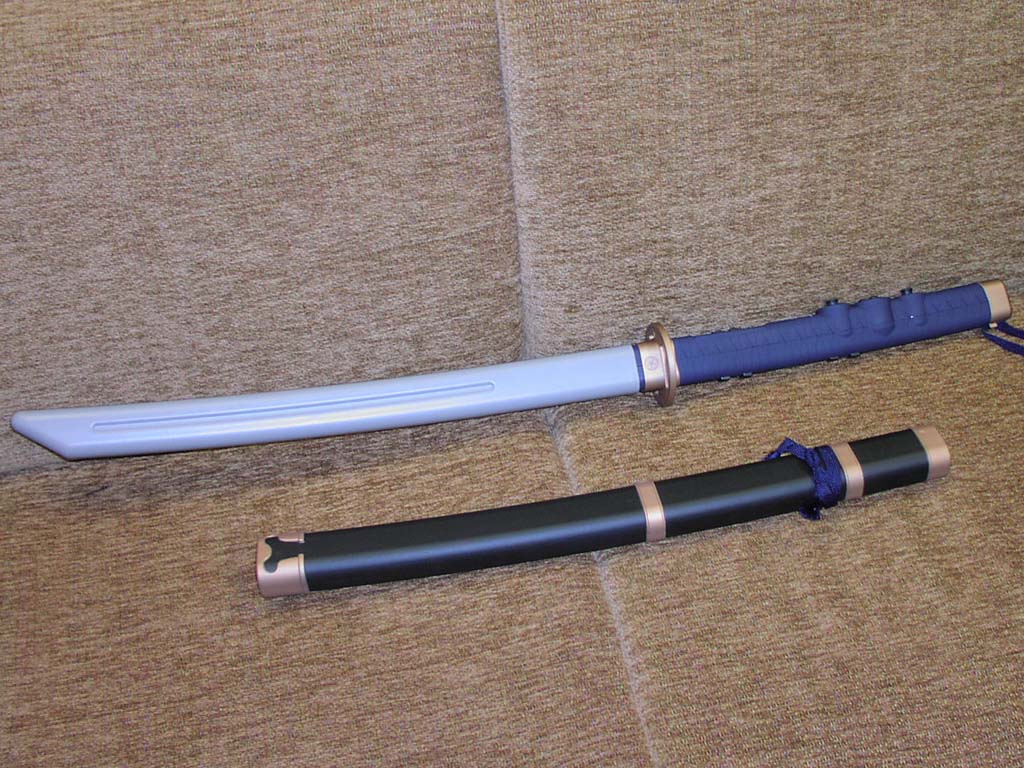 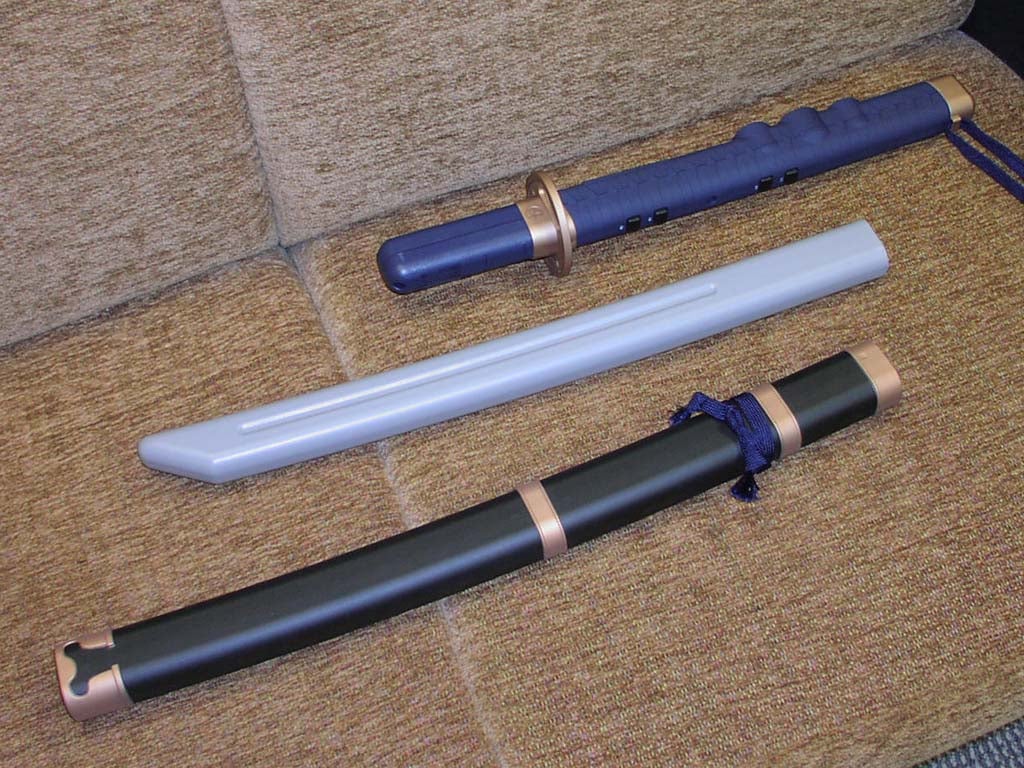 Retail availability hasn't been announced, but during our meeting it came out that Hori was talking to most of the large, national outlets you'd expect. In reality, if the Katana were picked up by one of the biggies, it could very well become hard to find. More news on availability as it comes.

The deal with the Katana is that a swiping action acts as the attack button. An internal sensor picks up on sudden motion. It doesn't matter which way you swing it, though the natural action is to go from left to right, as if you were really sword fighting, at least in the child's sense. As all four buttons are also on the handle, you don't have to use the swipe motion to play. In fact, sometimes you don't want to. It takes a while to get used to accurately controlling the analog stick/s while swinging the Katana around. For this reason, players might go for the "normal" control in some circumstances. 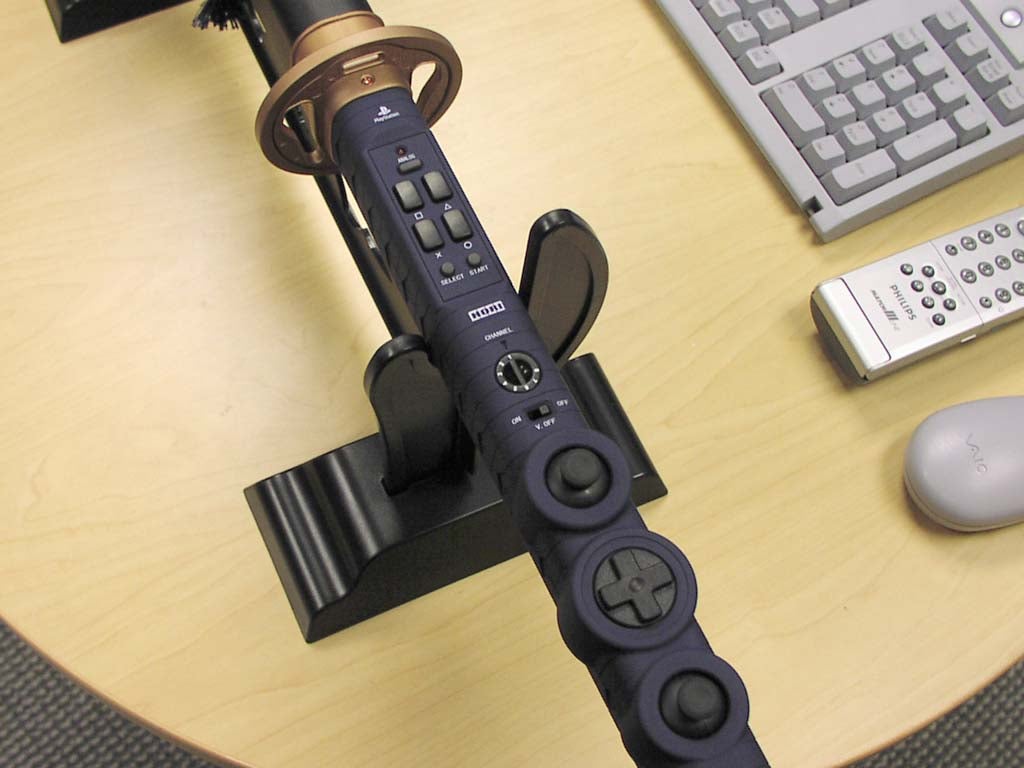 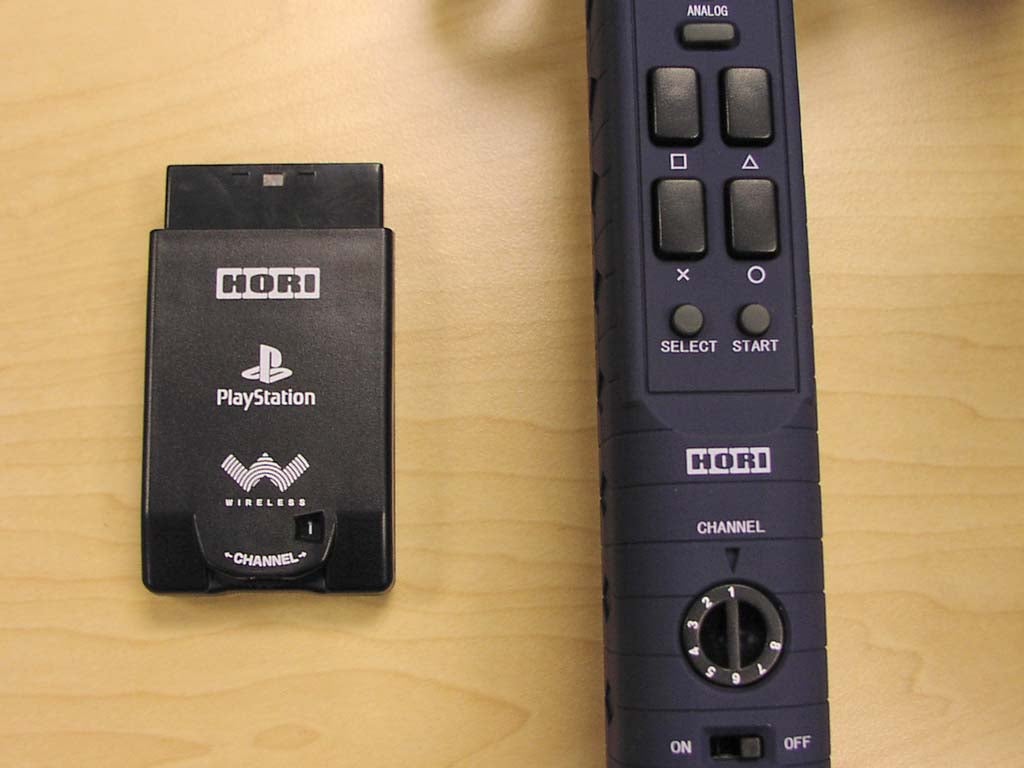 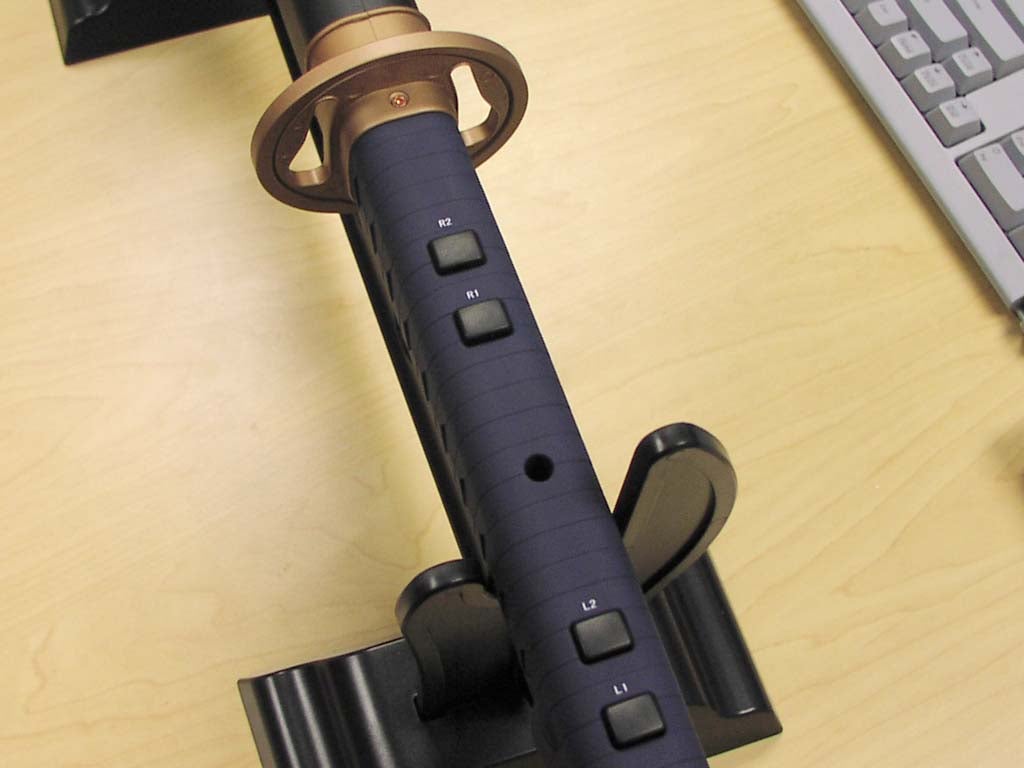 Hori designed the Katana so that the "blade" can be removed. We have a decently sized demo room, so we weren't in danger of knocking over mom's china or bopping little sis on the noggin. You could swing with abandon. However, in close quarters you might want to remove the "blade" and just use the stump. You can still employ the swing action, as the sensors work the same with or without the "blade."

As you can see in the images, the Katana is a wireless controller. There are eight channels from which you can choose, so you will most likely be able to get a clean signal without much trouble. You simply match the number on the dial on the handle with the number on the transceiver that plugs into your PS2's controller port. Range hasn't been announced, but we will know more for the review. 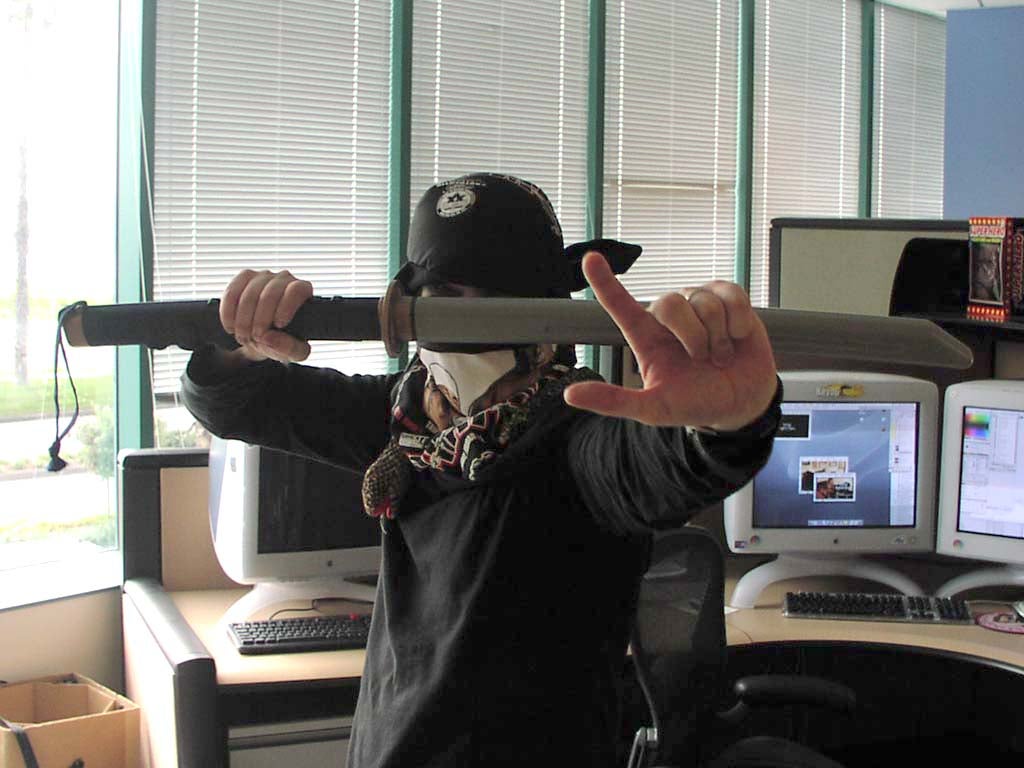 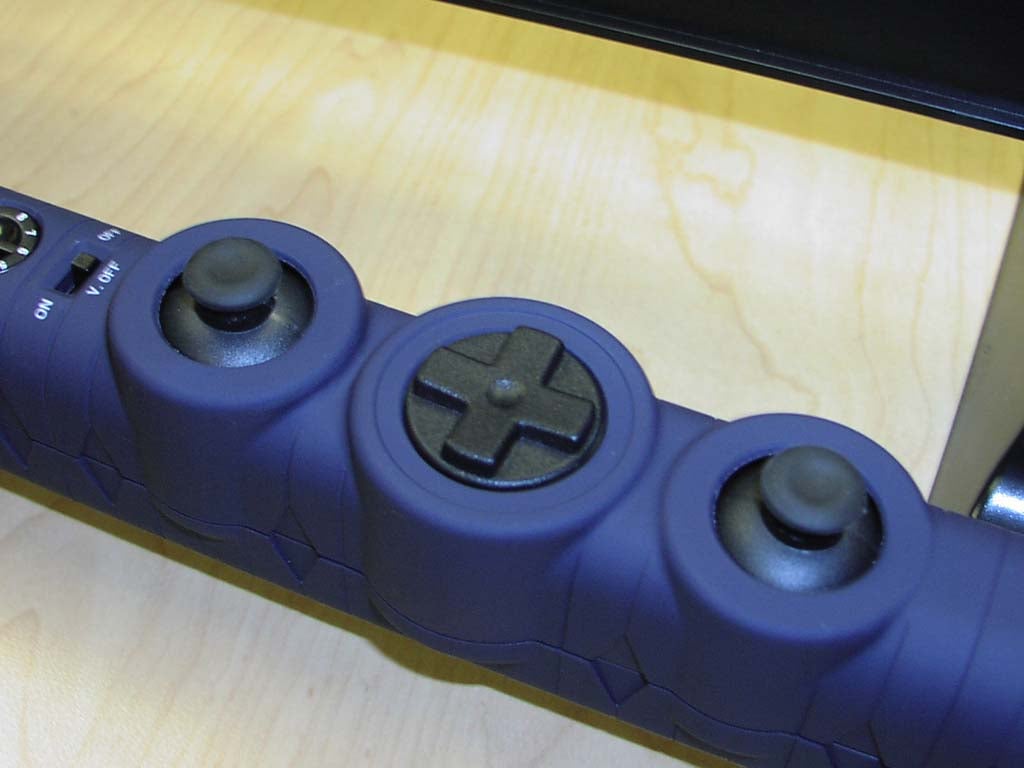 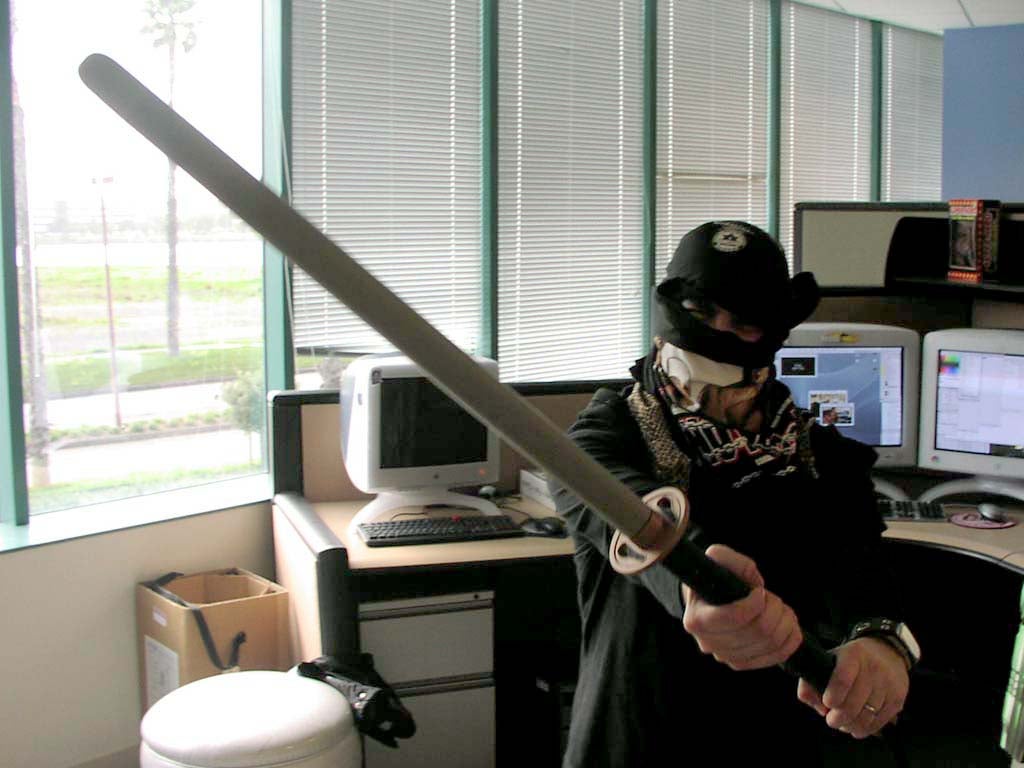 Hori installed vibration motors in the handle of the Katana. You can turn them off in order to extend battery life. The company claims about five hours of battery life, though they weren't sure whether or not this was with or without vibration enabled. Either way, we thought five hours sounded a little scant. Even with vibration. Perhaps the internal motion sensors are super power hungry.

The handle has all of the normal Dual Shock 2 buttons. You get four action buttons, two analog sticks, a D-pad, and four shoulder buttons. The shoulder buttons are set on the bottom of the handle and are in easy reach. You also get an analog switch, start and select, and the channel dial.

We will go through the performance of the stick in the full review. We will also have movies of it in action in the hands of our fiercest editors.
-- M. Wiley